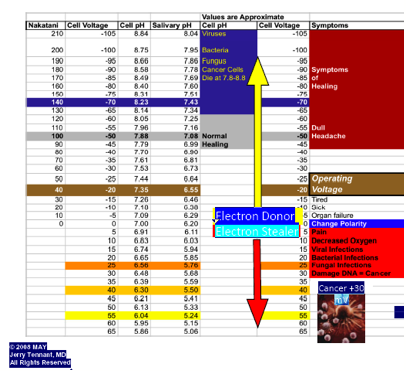 HYPERBARIC CHAMBERS and Autism:
Most kids with autism that I have talked to have a different voltage than kids that do not have autism. The brain when it gest more oxygen has a more adequate voltage than before they go in. The more the voltage goes back to normal the more benefits I hear about. It is not just about the voltage of the cells, mostly their brains.Most autistic kids have an anaerobic metabolism, they are very low voltage and low on oxygen. You cant change by giving them more oxygne without raising their voltage.
I would test every day the voltage of an autistic child and see if they are changing. If after a session if the voltage doesnt change then the problem is usually not anything to do with oxygen and a hyperbaric chamber won't ususally help. this is why some parents say the chambers don't help and other parents say its the best thing ever. The parents are just ignorant. But, its not their fought. Having the voltage go up the more their brains can usually function. Most healthy kid are at -30. The goal is to get them back to -20 with the help of using oxygen so their voltage stays higher so they can function better.
the oxygen cannot disolve if the voltage is low. It work both ways, the cells can't keep their voltage if the body isn't get the voltage in the first place. When the kid goes in the chamber wiht an already low voltage, I would not even waste my time in the chamber before a few things are taken care of first because oxygen will have a very hard time dissolving into their cells when they go in the chamber with a low voltage to start with.
If they have a high voltage going into the chamber, then the chamber can do its job. Going in with a low volgtage is like inflating a tire with a leak in it. Most parent that buy chambers for their austic kid are so naive and go from one protocol to another. i would say about 80% of the people that don't use the chamber right are the ones that complain they didn't work. The other 20 percent are doing things for their kids along with using the chamber and don't even know their kids voltage or how to test it but they are doing it right. 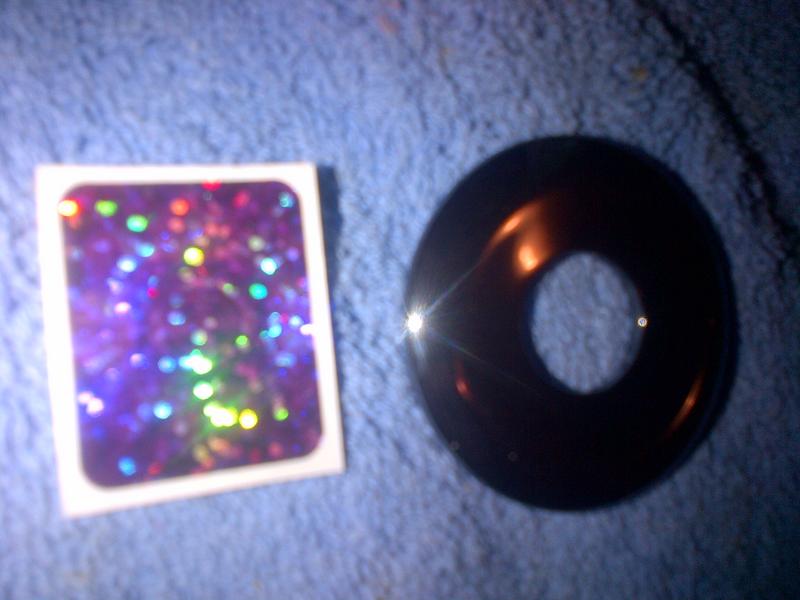 This is a zero point infused sticker and a zero point pendant. I got 24 sets of these to donate to any kid with autism. I have seen a huge difference when kids wear these that I have given them to. I have about 50 youtube videos that I did with this pendant too. They normally cost 160 on the net. They are free of charge thanks to one of my customers. Call me if you want a pendant and fractal sticker. These have helped restore voltage in most of the people that I have tested. One set per person.
1 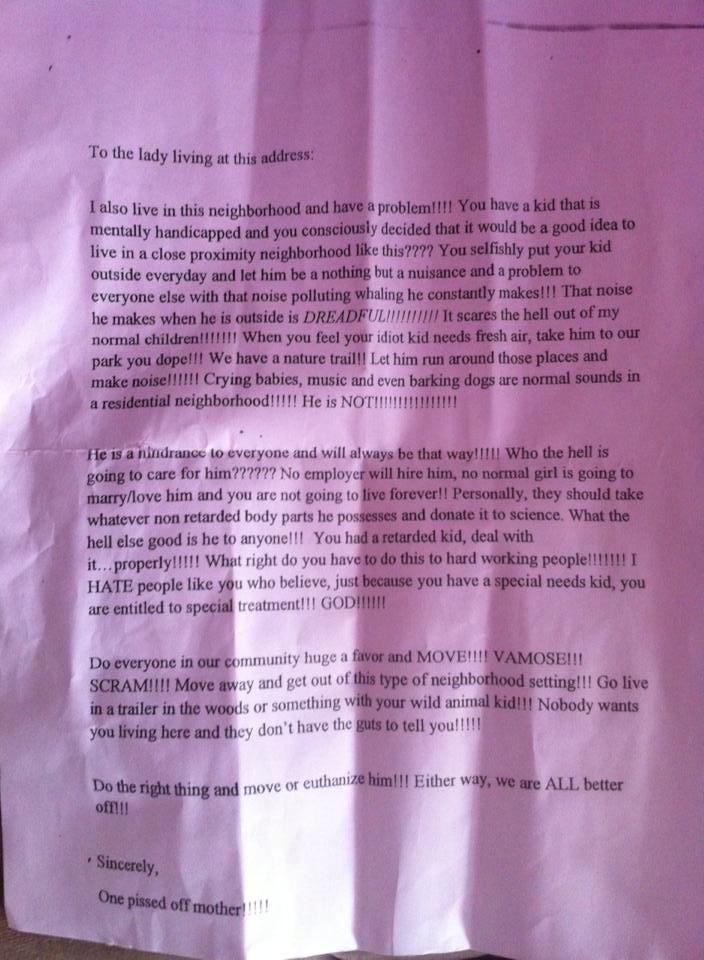 Hateful letter sent to a family of an autistic boy.... slipped under her front door.
Since my site has been up, of all the people who have bough chambers, nearly half were to parents who have autistic kids. About 9 in 10 chambers sold to these parents were used chambers. Many parents with kids that are 5 to 6 years old, this is usually the age of the kids by the time the parents decide to buy a chamber for them. There is no way most parents can afford a new chamber at this time. I reserve chambers for those who have a prescription for a chamber who have Autism first before any other need looking for a chamber unless someone is in a dire situation.
I know what it is like having autism. I also know what it is like to ride the short bus and go in a school where I have to wait for the teacher to escort me to my next class because of the problems that happen in the halls when there is no staff. I hear stories from parents and I will not turn down any parent who can't afford a chamber for they kid. I will subsidize the prices of the used chambers I get although I can only discount so much off a new one.
Putting a biomat or a Bemer mat is also nice to have. I have heard many parents saying how these also benefited when their kid layed down in the chamber with one of these mats under them. There are some newer mat companies that I have just researched and will be putting my reviews of them up.
Note: most parents that don't get results from the hyperbaric chamber almost always don't use an oxygen concentrator with their chamber. Also, some kids are chemically sensitive and a used chamber that has been out a while doesn't have the new scent of a new one. Kinda like how the new car smell goes away after a while. When I get a new car, I always ionize the entire car to get rid of the formaldehyde smell.
If a kid needs a hyperbaric chamber, I will do my best to make it affordable and do whatever I can to offset the costs of a new one.
If your kid has autism, please let me know on my hyperbaric chamber quiz.
1

I can determine how someone feels by their shortness of breath. I met an autistic boy who had severe autism and was trying to give him an ionic foot bath session. His mom kept telling me I would never be able to do this because he wouldn't stop moving and wasn't cooperating. I felt compassion as I know what its like to not be in control of ones faculties. I watched the mom insist he be still and relax over an over. She went outside to make some phone call and left him with me.
I looked at the kid and didn't say one word. I had a grin while looking at him and started taking long deep breaths. This kid showed no interest in following any of my instructions. If I breathed, then he breathed. If I talked, he talked. If I stand up, he stood up. He was an imitator.  I let him through series of long super powerful breaths then 3 or 4 slow breaths then a few limbic exhales then some more powerful breaths. Then we did alternative nostril breaths. He liked those. Then we did some fun bumblebee breaths followed by some fire breaths. We finished it with quick exhales. We pretended to be young dragons. This went on for 20 minutes. The kid kept his feet in the foot spa the entire time. His mom never got to see this.
This kid followed my instructions perfectly. He was so starved for oxygen it was obvious when the mother came back into the room. When the mother came back into the room he felt so proud and showed his mom what he learned. He was was calm and totally attentive to his mom. If I said his mom looked shocked it would be an understatement. I told his mom to never use the word relax or "be quiet" or "calm down" to him ever again. I said to replace with "Breath.. breath. "Good job" or "you can do it". Or "Great job, breath slowly".
I also instructed her to start doing these breathing sessions for 10 to 20 minutes a day with him and keep switching techniques to engage him more. This will keep him more on the imaginative side, (where he probably is most of the time).
The Largest Hyperbaric Chamber Review Website on the internet.

Off Gassing from PVC

I strongly urge parents not to put their child in a chamber that has not off gassed yet. All the chambers on this site are made with Low Plasticide Urethane. None of them are with PVC. It takes about 2 to 4 weeks depending on what material the chamber is made out of to off gas to where the VOC release and the smells go away. If you don't mind the smell of a new tired store then it probably won't bother you. Most children with autism are very sensitive to this smell. I urge parents that are going to use a hyperbaric chamber with autistic children to NEVER use chambers made out of PVC. Let me know on the quiz if your kid has any chemical sensitivities.
We're open now
1-877-326-5964
Ask for Jayden